Quinoa Marche is a business idea born out of the passion for the countryside and the outstanding properties of this “super grain” felt by four siblings – Oriana, Samuele, Emanuele and Daniele Zannini.

Their aim is to introduce and broaden the area of cultivation and processing of quinoa in the Marche Region, by creating a highly innovative production chain that is sustainable from an environmental, social and economic viewpoint, in order to meet the growing demand for healthy and nutritious foods.

Emanuele Zannini graduated in 2002 in Agricultural Science and Technology at the Polytechnic University of the Marche. During his PhD in Applied Biomolecular Sciences, he selected and characterized lactic acid bacteria with antifungal properties to be used as a natural means of preserving baked products. He has won several awards with Quinoa Marche, including “new entrepreneurial talent 2014” MIPAAF, winning a place at the Expo in Milan.

We have had the opportunity to interview Emanuele about his beer produced on 100 % Quinoa, and how he has used Ondea® Pro to make such a unique beer! 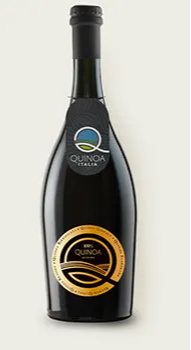 Interviewer: Could you give a short introduction about yourself and what you do?

Emanuele: Absolutely! My name is Emanuel and I live in Italy/Ireland. I have my PhD in biomolecular science and a second one in food science in UCC.

We had an idea about 6 years ago to study what would be the up next in terms of the future of food, and what we should do to prepare. We had to be able to produce more and better with less. Quinoa was able to satisfy all of these requirements. Quinoa Is a high quality (nutritionally speaking) seed that requires low input and can be produced with a low environmental footprint, particularly in terms of water usage.

The idea was to see if Quinoa can grow in and be of commercial interest in Europe. Quinoa is also gluten free and low in FODMAP, so it can easily be consumed by people affected by Celiac’s Disease or gluten-sensitivity and IBS. The grain can address a lot of different consumers. Health issues are quite common in western Europe, so the cleaner and healthier the better. It can be quite tasty as well. I’ve been working in Ireland since 2009, so I thought, “I should make a beer out of this as well!” In Ireland, they are used to changing/transforming carbohydrates in extreme cold.

So that’s how we began to develop a new type of beer brewed with quinoa. However, it did not perform like barley or wheat. We needed support in the brewing process, and that’s where Novozyme’s enzymes came into play. We used different types of enzymes to break down the starches, proteins and fibers. We had to release as much of the main components of the grain as possible so that the yeast could have access to the nutrients and perform optimally during fermentation.

During the general engineering process, we were able to get very good extract and support the yeast group. However, this was a big interruption as a start up, so we couldn’t interact with multinational breweries. We started by targeting a craft brewery with some limitations because we are not pasteurizing the beer, so it’s both unpasteurized and nonfiltered, and ferments in the bottle. It’s a very craft process and much more dedicated because you have live beverages at hand. You must be very careful not to fluctuate the temperature because your products could change easily.

It's also much easier to waste the products at hand if you don’t know exactly what you’re doing with the raw materials you’re using and their properties. That can result in a bad product. That’s why we are so particular in our approach. We want to make sure brewers achieve a certain standard of quality in their fermentation. It’s quite challenging, but quite interesting.

Interviewer: How much did you know about enzymes before this project, and had you tried to use them before?

Emanuele: Definitely! I have used a lot of enzymes. Of course, you need to know exactly how your constituents in the grain are packed because that helps you understand which type of enzyme you should use to better functionalize your raw materials. Knowing the way that the enzymes are performing or operating upon your substrate is crucial. We were testing so many different enzymes.

When you get the spec sheets you know exactly what time, what temperature range, and what optimal pH the enzymes need to process, but that also depends on what type of substrate you're using. Preliminary trials has been done in order to optimize the enzyme application ensuring, at the same time that the raw material was actually properly processed and yeast has the optimal substrates to growth and perform. The chemical composition is critical. If you ferment under stress conditioning, the yeast will not perform as planned. Unusual flavor could be released due to the stress condition growth. This was another aspect that basically has been taken into consideration to make sure that we were doing the right things in during brewing process.

Interviewer: Were there any specific problems before you started using Ondea® Pro?

Emanuele: Definitely. When I was working in a pilot scale, we were using water that had been pretreated. There were several chemical meters being tracked and optimized in order to fulfill the requirements for the brewing process. When I moved to the brewery, they were just using tap water. That has a huge impact in the performance of the enzymes in general, or the ingredients that you're using. For example, if you have so much chloride in your water, and then you're going to have a significant influence on the performance of your enzymes. That means that you end up extracting less sugars from your ferment, which of course has negative consequences on your cost. The level of knowledge of water quality and basic chemistry, it seems stupid, but none of the craft brewers had a pH meter. It seems strange, but it’s knowledge that could make huge difference on their business.

The things that sound like they’re not a big deal really make a difference at the end of the day.

Interviewer: Even though there have been some challenges, would you still be happy to use Ondea® Pro?

Emanuele: Well, from my perspective, the quality of raw material during the year is not always the same. It’s always changing from batch to batch. That's means that the brewers need to adapt each batch, according to the raw materials they're receiving. This type of adjustment requires knowledge and time effort from the brewer. However, when you use enzymes you can get a shortcut, because you can fill the quality gap you could normally have not from the raw materials. Then you higher you lift the performance of the raw materials at the level that you required. It is a safe shortcut for the brewers. I think it would be silly not to consider using enzymes.

In my case it was essential because the quinoa doesn't have enough complex enzymes, so we need to pump it up a little bit with the extra exogenous enzymes. In regular barley or wheat beer, or when you make beer with adjuncts, the use of the enzymes will make your life much easier and save a lot of money.

Learn more about how Ondea Pro can help you make the most of your unusual raw materials below, or schedule time with Brewmaster Mark Stevens for a one-on-one learning session!